Third generation Angus producers Ron and Lynne Hinrichsen of Hinrichsen Ranch in Westmoreland, Kan., are the definitions of ‘Angus enthusiasts’. They knew early on they wanted to raise Angus cattle and started with five cows they bought before they were married. 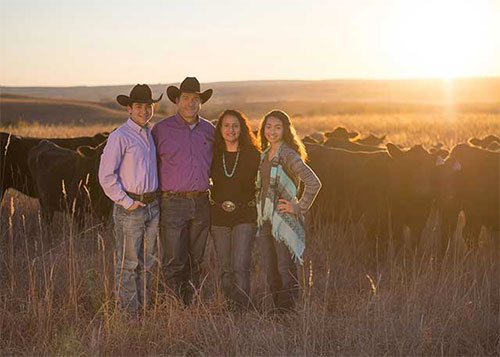 Ron Hinrichsen grew up in southern Indiana on a diversified livestock operation before attending Kansas State University. He graduated with a degree in Animal Science with a business option and pursued a sales career in the agriculture industry. Ron currently is the Director of Beef Sales and Marketing for Genex Beef. He and Lynne were actually married the evening of his college graduation. Together they continued to expand the Angus herd and build a foundation operation for their children.

Lynne Hinrichsen’s story began with an urban upbringing in Detroit, Michigan Although she has now spent more years in agriculture than living in the city, she feels her background gave her a better understanding of consumer needs and how they think. After graduating from Michigan State University with degrees in Animal Science and Agricultural Communication, she moved to Kansas where she went to work in sales for one of the largest meat packing companies. Today, she is the Agribusiness Development Director for the Kansas Department of Agriculture and continues

“Kansas felt like home to both of us,” Ron said. “We started raising Angus cattle together and haven’t looked back. It’s the breed that puts it all together.”

Their primarily seedstock operation is built on heavy use of AI and ET technology. Hinrichsen Ranch is focused on calving ease and carcass genetics and are breeding livestock with the commercial cattlemen in mind, she said. The family sells bulls through a cooperator sale and in partnership with a family that leases cows from them. Females are sold privately throughout the year. The couple also develop a few heifers and steers for show prospects for children, Cale and Eva as well as other junior exhibitors. Cale and Eva work with their parents developing their own cattle and show on the local, state and national levels.

In addition, the family believes in giving back by serving the Angus breed through their industry involvement. Ron has been involved in their state Angus association and served in many roles including president. Lynne has also been a member of the Kansas and American Angus Auxiliary since first moving to Kansas.

“I admired a lot of the ladies who were working partners in their family operations,” Lynne said. “I really enjoy fostering relationships among the women in the organization and across the country while supporting the Angus youth through education and awards.”

She served as the 2015 President for the American Angus Auxiliary and completed her eighth year on the Angus Auxiliary board in 2016. Her commitment to the Angus breed has transpired to her kids, who are both actively involved in the Kansas and National Junior Angus Associations.

“It truly is a way of life for us,” Lynn Hinrichsen said. “I can’t think of a better way to live.”